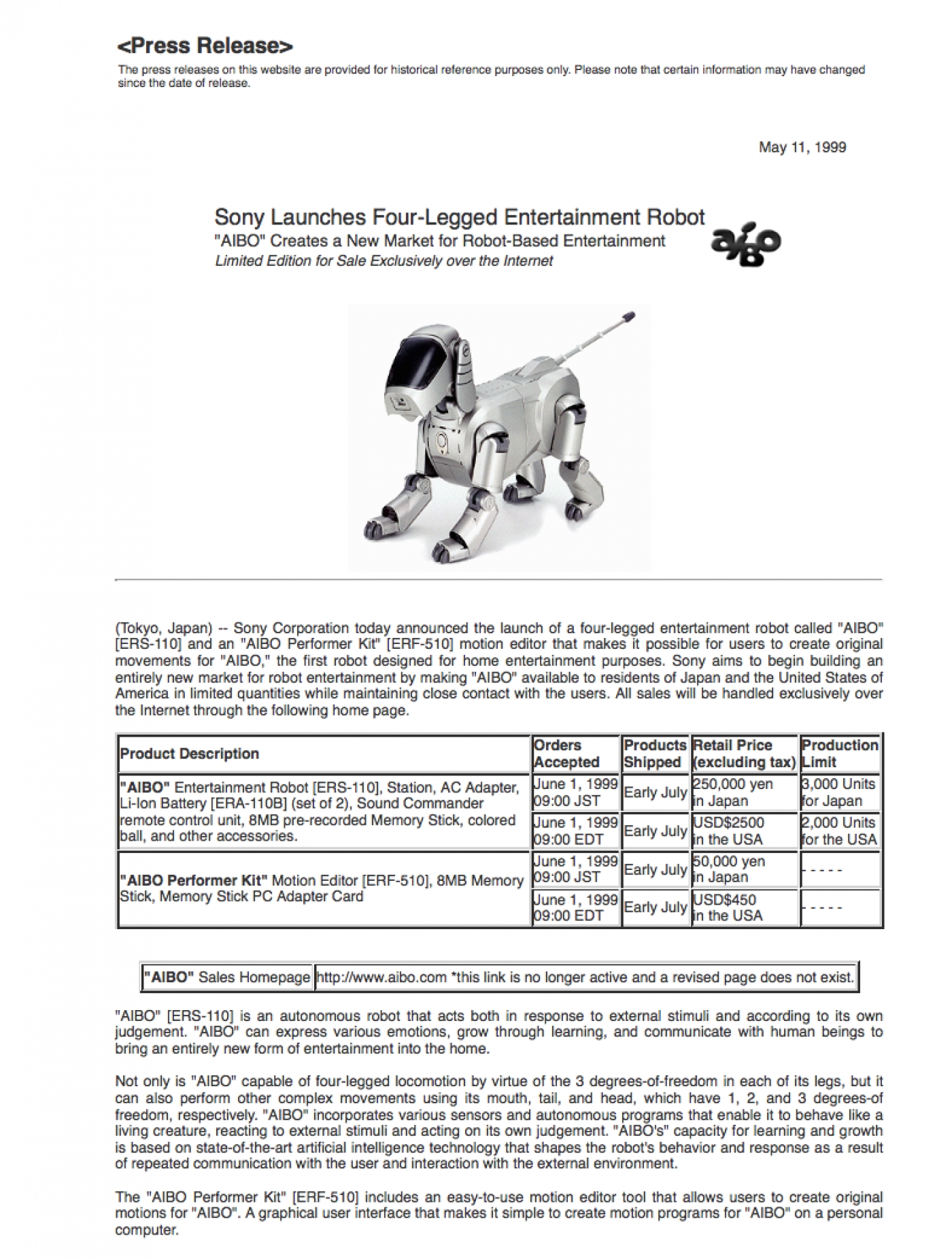 The press releases on this website are provided for historical reference purposes only. Please note that certain information may have changed since the date of release.

(Tokyo, Japan) -- Sony Corporation today announced the launch of a four-legged entertainment robot called "AIBO" [ERS-110] and an "AIBO Performer Kit" [ERF-510] motion editor that makes it possible for users to create original movements for "AIBO," the first robot designed for home entertainment purposes. Sony aims to begin building an entirely new market for robot entertainment by making "AIBO" available to residents of Japan and the United States of America in limited quantities while maintaining close contact with the users. All sales will be handled exclusively over the Internet through the following home page.

"AIBO" [ERS-110] is an autonomous robot that acts both in response to external stimuli and according to its own judgement. "AIBO" can express various emotions, grow through learning, and communicate with human beings to bring an entirely new form of entertainment into the home.

Not only is "AIBO" capable of four-legged locomotion by virtue of the 3 degrees-of-freedom in each of its legs, but it can also perform other complex movements using its mouth, tail, and head, which have 1, 2, and 3 degrees-of freedom, respectively. "AIBO" incorporates various sensors and autonomous programs that enable it to behave like a living creature, reacting to external stimuli and acting on its own judgement. "AIBO's" capacity for learning and growth is based on state-of-the-art artificial intelligence technology that shapes the robot's behavior and response as a result of repeated communication with the user and interaction with the external environment.

The "AIBO Performer Kit" [ERF-510] includes an easy-to-use motion editor tool that allows users to create original motions for "AIBO". A graphical user interface that makes it simple to create motion programs for "AIBO" on a personal computer.

"AIBO" incorporates emotions such as happiness and anger and instincts such as the need for companionship. It operates autonomously in response to external stimuli and its own temperament and express emotions as well. "AIBO" is equipped with adaptive learning and growth capabilities that allow each unit to develop a unique personality including behavior shaped by the praise and scolding of its owner. Moreover, "AIBO" features 'game' and 'performance' modes that allow the user to give instructions to the robot using a tone-based remote control unit called the "Sound Commander." Users can also create motion data using a PC-based motion editor tool, which is sold separately, for the performance mode.

2. Smooth Movement with 18 Degrees-of-Freedom
A total of 18 degrees-of-freedom (1 for mouth, 2 for tail, 3 for head, and 3 for each leg) allow "AIBO" to walk smoothly on four legs as well as perform other complex motions.

3. Memory Stick for Easy Replacement of Programs
A pre-recorded 8MB "Memory Stick" comes as an accessory to "AIBO". It is used to store the software modules that control "AIBO's" movements and data that is generated during the learning process. "Memory Stick" makes it easy for users to insert new software modules into "AIBO," including original motion programs created by the user using the motion editor (sold separately).

The use of sensors, microphones, and speakers that roughly correspond to the sensory organs of a living creature make it possible for "AIBO" to communicate and react to external stimuli with a high degree of autonomy.

: For recognizing tactile stimulation like being pet or hit

: For detecting the shapes and colors of objects when approaching or avoiding them

: For detecting the distance to objects

: For detecting the direction of a sound source and hearing sound from the Sound Commander remote control

1. Simple Creation of Original Motions for "AIBO"
Even users with no prior robotics or programming experience will find it easy to create original motions for "AIBO." Through the use of a graphical user interface, users can manipulate a 3-Dimensional model of "AIBO" to edit the robot's movements in a manner that resembles the editing of video footage. In addition, sound editor software already on the market makes it possible to create sounds in the MIDI and WAVE file formats and use them to replace "AIBO's" original sounds.

2. Incorporates Timeline Editing, Simulation Features
All of the robot's motions can be displayed on a computer screen along with a timeline feature, which allows users to confirm each of the motions, edit them very efficiently, change their order, and add new motions. Moreover, the software can conduct a simulation to confirm that none of the motions exceed the mechanical limitations of the robot's limbs and that none of the moving parts will collide with one another. The simulation also allows the user to check other factors, such as the speed of the robot's movement.

Stereo microphone (one on each side)

About 1.4kg (Body Only)
About 1.6kg (Including Memory Stick and Battery)

Just in case anyone wants to know, My own ERS-110 is called Freddie (I also have a sprocker spaniel called Freddie which gets at least one of them confused quite often).

More in this category: The Sony AIbo Legacy »
back to top