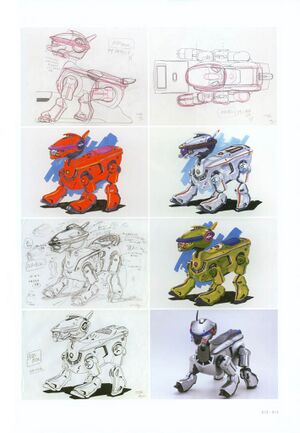 A collage of Kawamori's work on AIBO

The ERS-220 was designed by Japanese designer, artist, and producer Shoji Kawamori. Notably, he also created the anime series Macross and worked on mechanical design for Ghost in the Shell.
Unlike other AIBO models, the ERS-220 was not designed to appear at all organic but instead took a directly mecha-inspired approach.

The hardware of the ERS-220 is identical to the ERS-210 with the exclusion of four degrees of freedom (no moving "tail" module or articulated ears). A variety of LEDs were added that were not present on the ERS-210.

Along with ERS-210's, the ERS-220 was released as a Supercore AIBO. However, the ERS-220 was not utilized in RoboCup competition. Worth noting is the ERS-220's dependence on OPEN-R 1.1.3, which shipped out-of-the box with Supercore modules but not the initial releases of 2x0 cores.

The ERS-220 was also released as the Transformation Kit, or ERS-220E1 (referred to as ERS-220/TK frequently by the community.) The kit included the ERS-220's modular components (head, tail, legs) without a core as to offer a way for ERS-210 owners to update, if desired, to the newer AIBO.